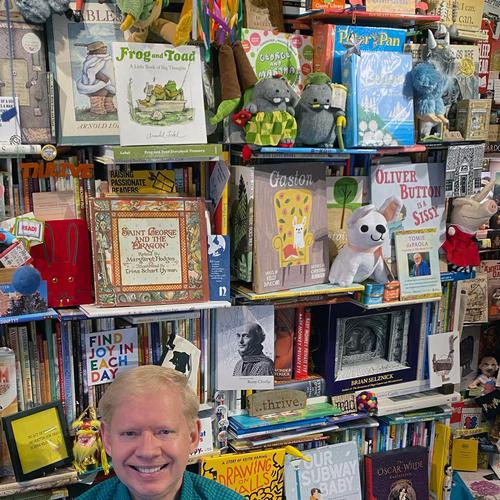 Categories covered by Nathan A.

Talks covered by this speaker

Captivating Reads That Just Happen to Include the LGBTQ+ Reader

Nathan started collecting books when he was twelve after finding a copy of Tom Sawyer on the bank of a canal in Boise, Idaho. In college, after a children’s literature class with Jim Jacobs at BYU in 1976, his focus narrowed to children’s books. His library has grown, and now includes tens of thousands of titles collected over the past fifty years. He loves to read, review, teach, and share the wealth of children’s books. His special interests include picture books, especially biographical works, Shakespeare, informational books, mythology, and LGBTQ+ books. Nathan is very fortunate to be married to Jim Belmont, a very patient man, for the last 20 years.

Teaching has always been at the center of Nathan’s life, and he has taught grades K-6, with twenty years as a sixth grade English teacher in Jordan School District. He now teaches gifted/talented students at two Title One schools near downtown Salt Lake. In 1979, he began working on the children’s floor of the ZCMI Center Deseret Book for twenty years, followed by ten years at Borders Books in Murray, Utah. For the last decade, he has been working in the children’s room at The King’s English Bookshop. Upon earning a master’s degree from Westminster College, Nathan began teaching ELA methods classes and children’s literature as an adjunct professor for the last six years. Nathan’s is a life centered on books, and he loves to share what he has learned over the years!

Your logo could go here!

If you'd like to get your brand in front of attendees following the categories this speaker is talking about (on this page, via email and during each talk) contact us.
We use cookies This website (and some of its third-party tools) use cookies. These are important as they allow us to deliver an exceptional experience whilst browsing the site.